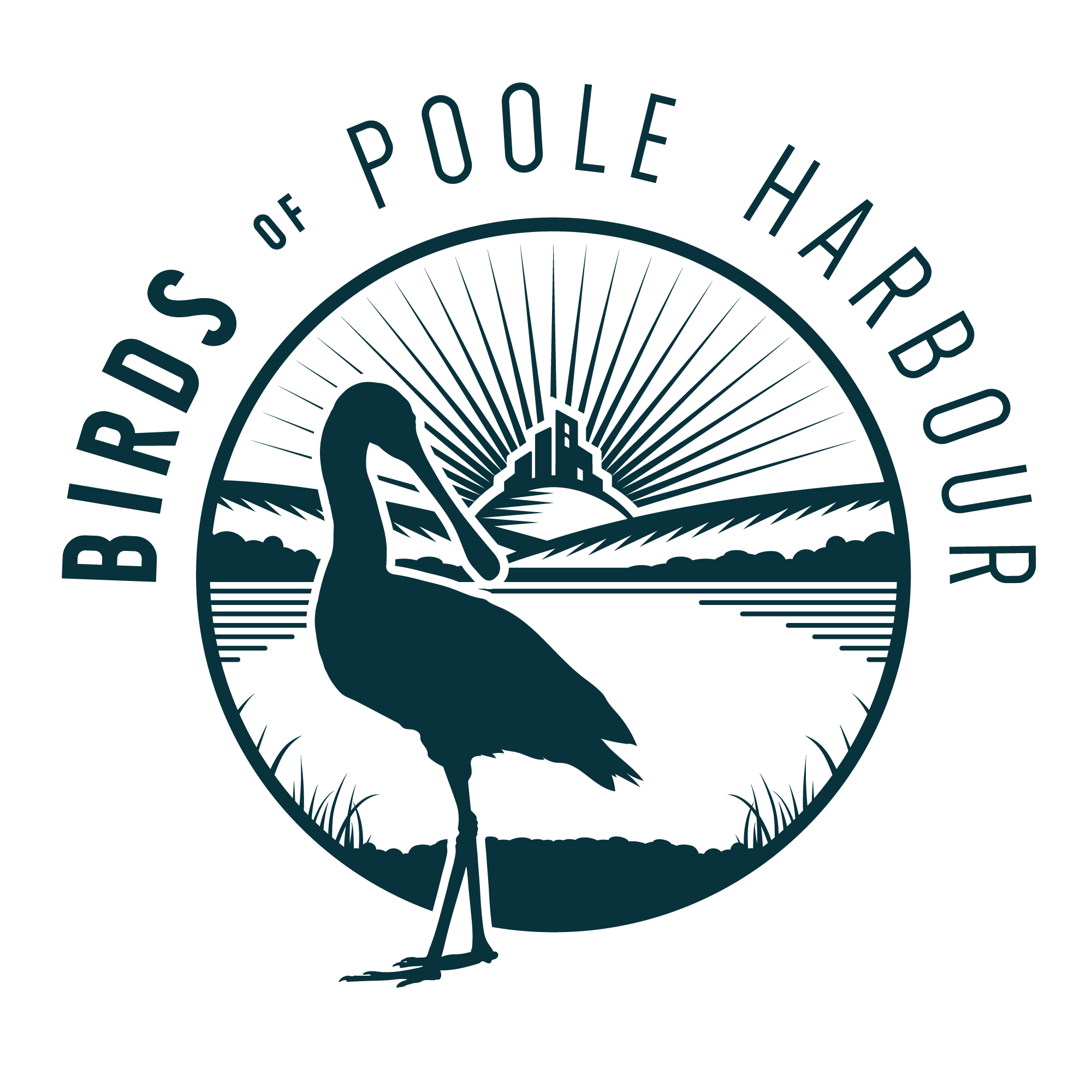 We enjoyed another outstanding Zoom presentation in February as 58 screens shared an enthusiastic and inspiring talk on Ospreys, given by Liv Cooper, who works for the Birds of Poole Harbour charity, and is the projects coordinator of the Poole Harbour Osprey Translocation Project (PHOTP).

Ospreys are superb birds of prey, native to Western Europe, but the 4 sub-species can be found in every continent except Antarctica. They feed exclusively on fish, both in shallow coastal waters and inland freshwater lakes and rivers. They are migratory birds, arriving in the UK in March or April, breeding over the summer, then flying south from August to October to overwinter. Some travel as far as the Gambia or Senegal, others to SW Europe. Younger birds fly south, but often delay returning for 2 or 3 years until when they are sexually mature. Poole harbour is an excellent stopover location for these migrating birds. 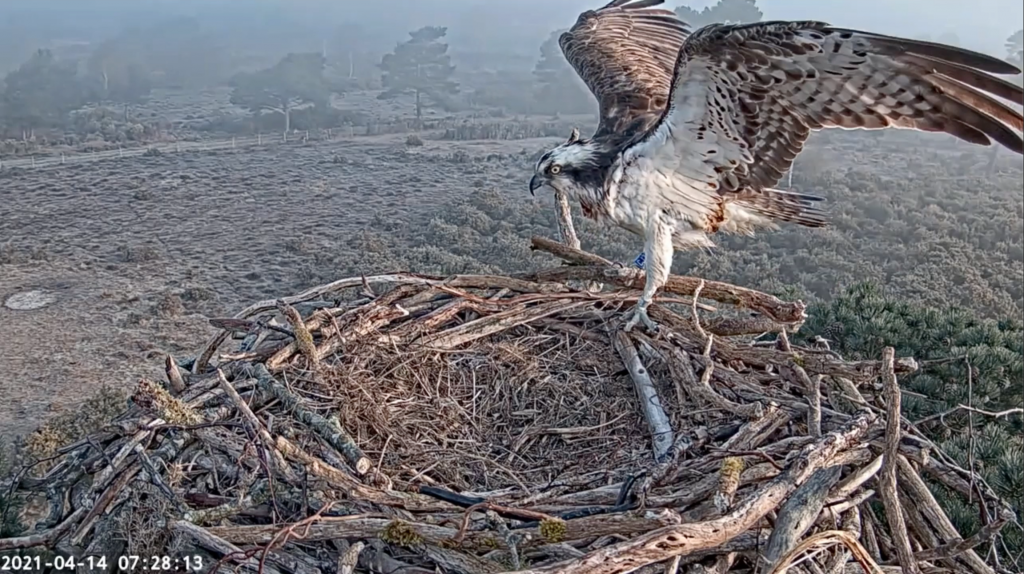 Once they reach their nesting location, they build large nests of twigs at the tops of tall trees (or nesting poles) and lay on average 3 eggs. Birds are usually monogamous, returning each year to the same nest, enlarging it every year. Males catch the fish to feed both the growing chicks and the female, whose role is to protect the chicks. These grow rapidly in 7-8 weeks to full size. Once fledged, chicks imprint on the surrounding area, learning to fly & fish, before migrating. Photo: Osprey bringing nesting material into the nest
Historically widespread, Osprey numbers declined drastically over Europe in the 18th and 19th centuries, mainly because of egg collecting and human persecution. Extinct in England in the 1840s, & from Scotland in 1916, there are now over 300 nests in the UK, a big increase since the 1950s. This is largely thanks to some pioneering conservation and protection projects since then. 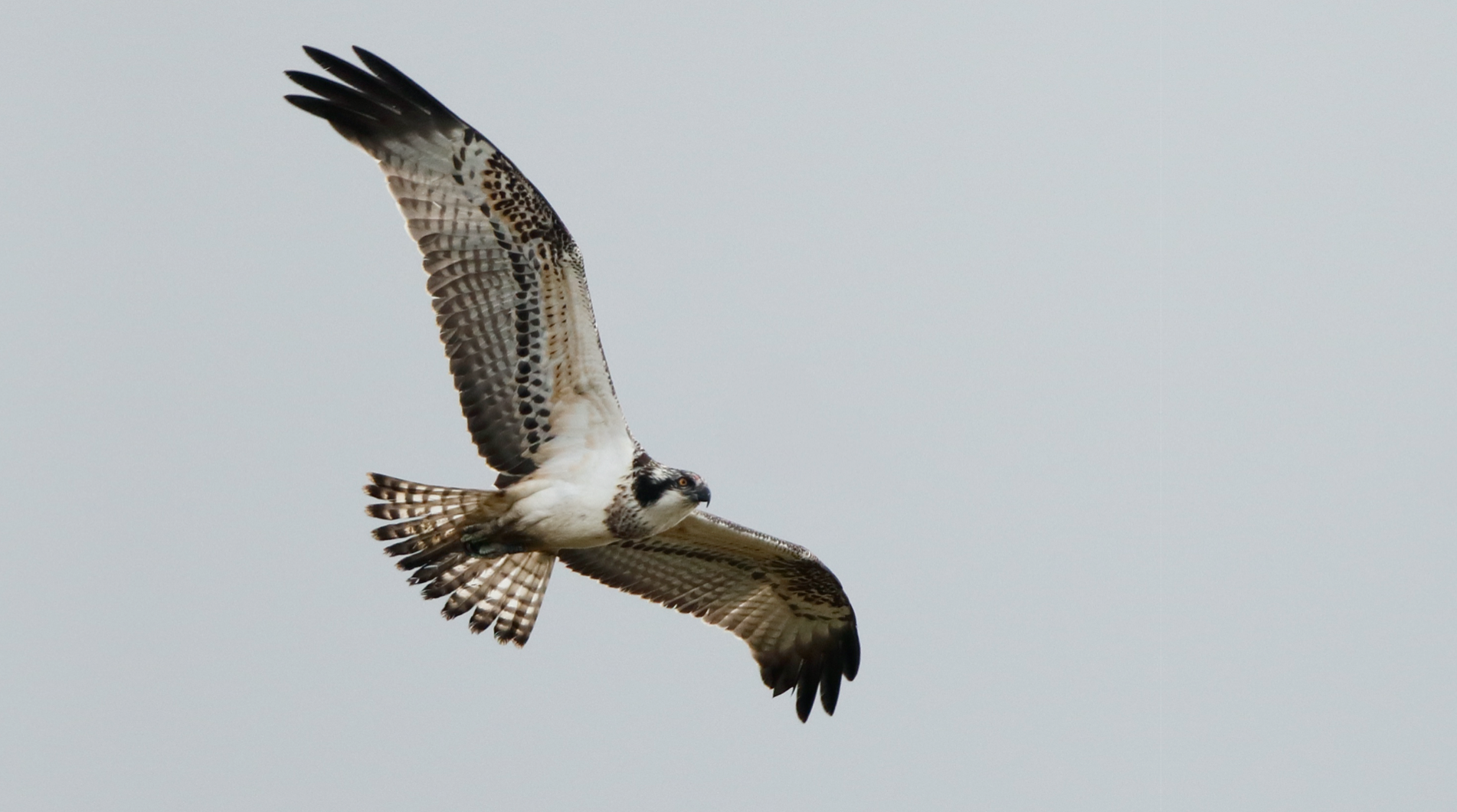 The reason for translocation projects is that the UK population is not very robust. Their stronghold is Loch Garten, near Inverness in Scotland, where they first reappeared in 1954, probably from Scandinavia. This time, human intervention ensured their survival by 24 hour monitoring during the breeding season, as well as ecotourism, educating the human population about these magnificent birds and the need to conserve them, & a decrease in the use of persistent pesticides like DDT, which had devastating effects on birds of prey. Photo: Osprey flying over Poole Harbour - Simon Kidner

In 1996, the first translocation project in Europe took place, led by expert Roy Dennis. Birds were selected and transported to Rutland water, where there are now at least 10 breeding pairs. From here, some males moved to Wales in 2004, set up nests and established what is now a thriving osprey population. 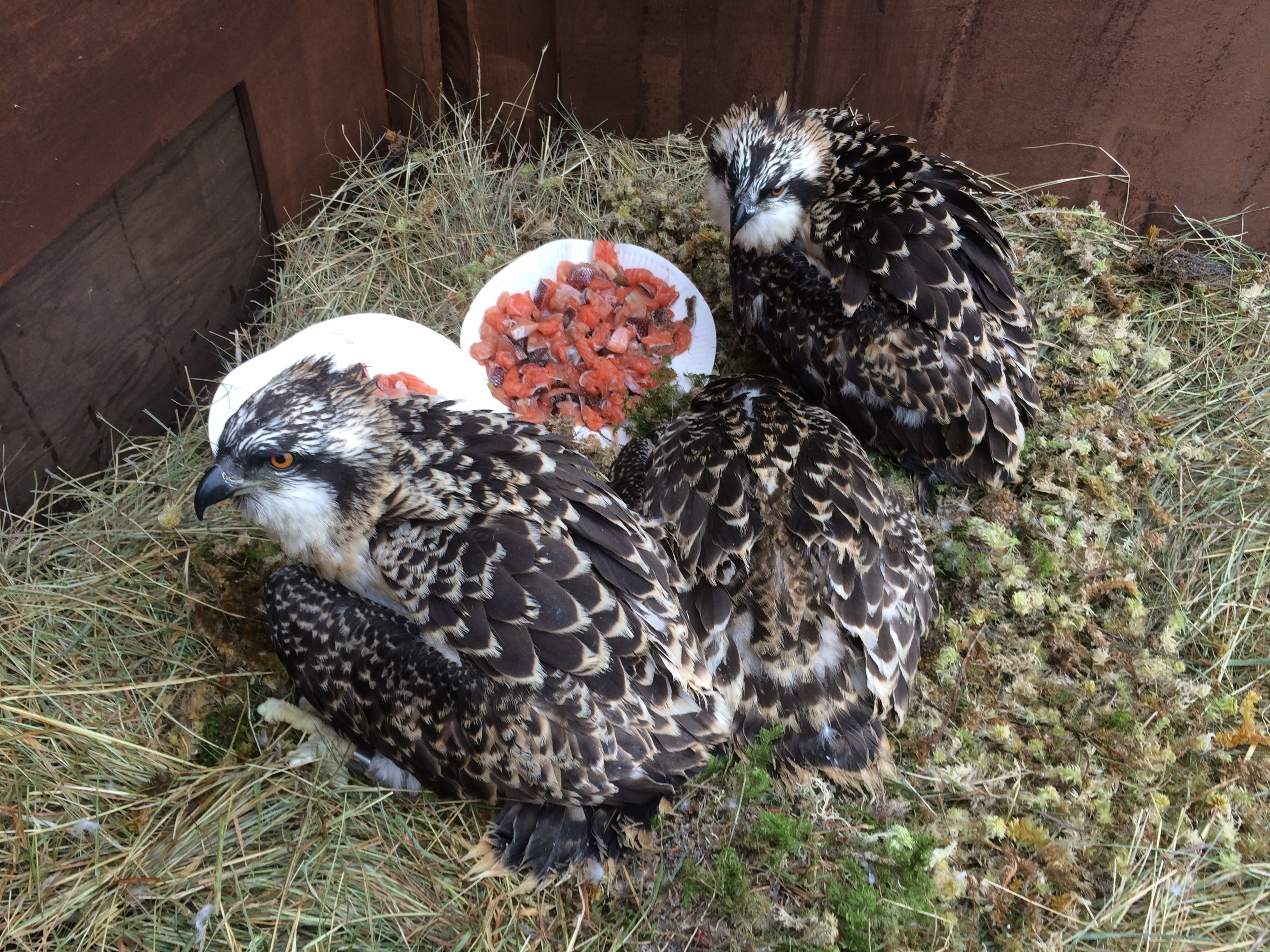 In 2015, the decision was made to translocate ospreys to Poole Harbour, and PHOTP was born. The area was considered ideal for them: a shallow lagoon full of fish, especially grey mullet (ospreys traditionally known as “mullet hawks”); several nesting platforms erected for them to use, and many other bird populations present, which are known to attract them. A successful application to translocate 60 chicks from Scotland to Poole harbour over 5 years resulted in the first translocation taking place in 2017, again led by Roy Dennis. They are placed in large holding pens to acclimatise, before being released.

Photo: Ospreys inside the holding pen 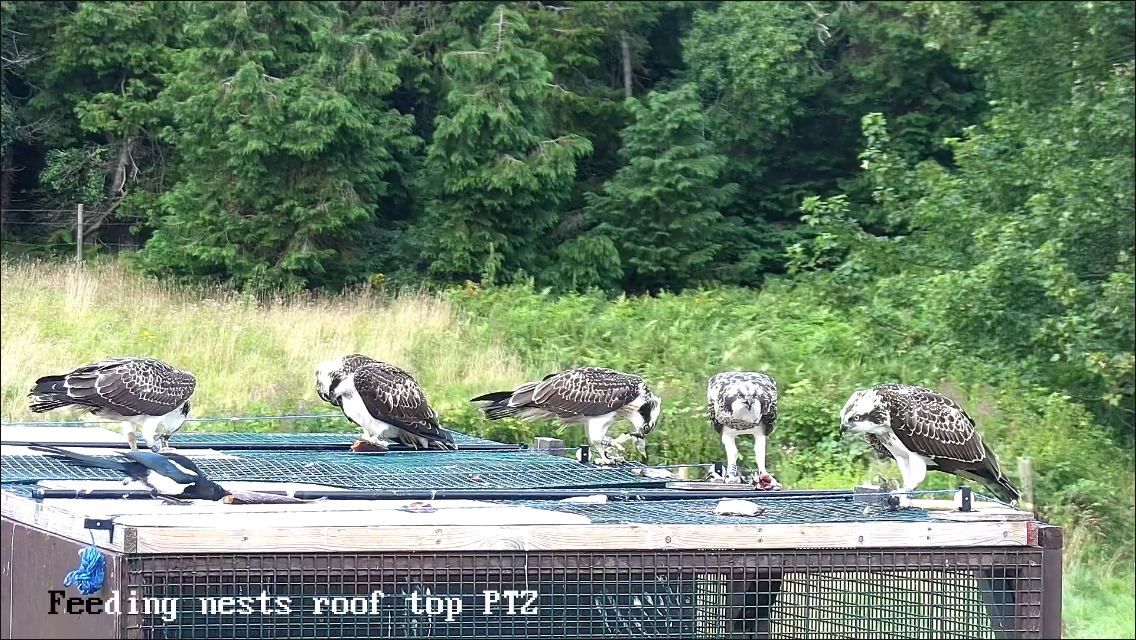 The largest, healthiest chicks are taken in July, at 8 weeks old (increasing the survival chances of their smaller siblings), before they can imprint on their local area. By moving them to Poole harbour, they should imprint there and return there after migration. They are fed on fresh fish, from the local trout farm, up to half a ton for 12 birds over a season! They are ringed and radio tagged, so that they can be tracked in the area. Photo: Young ospreys being fed after release 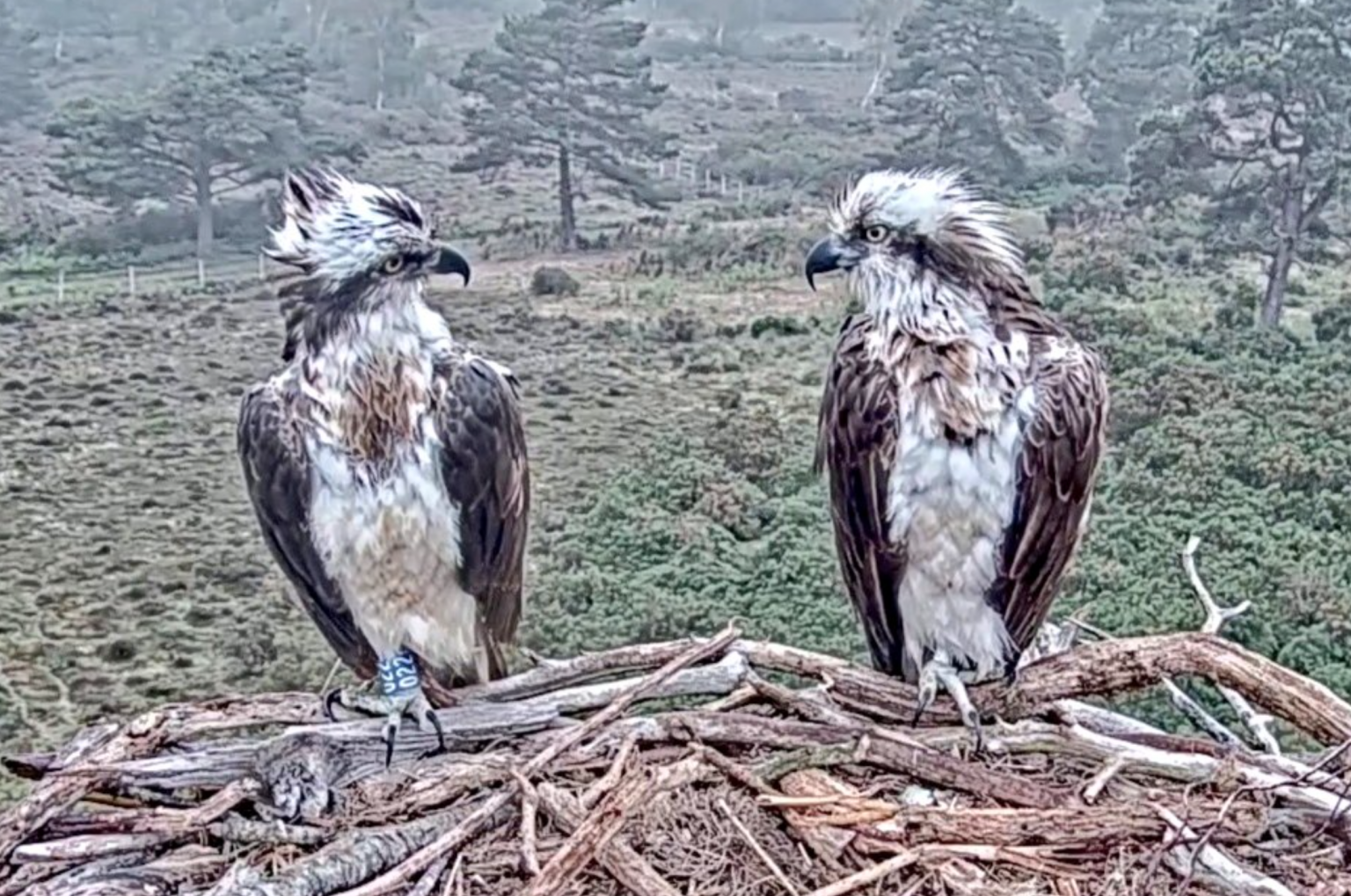 Once released, they are monitored and fed, on feeding nests, but otherwise left to explore the area and move further afield. Once they migrate, they have no satellite tracking, so their fate will only be known if they return to the UK and can be identified from their leg rings or head markings. Over the last 4 years, over 40 chicks have been translocated, most surviving and leaving the area on migration. Some have returned, one relocated to the Wales population, and a Rutland female, ringed CJ7, has relocated to Poole harbour & formed a pair bond with 022, a male translocated and released in 2019.  Photo: Male 022 and female CJ7 on the nest showing the sexual size difference, the female is 20% heavier than the male. 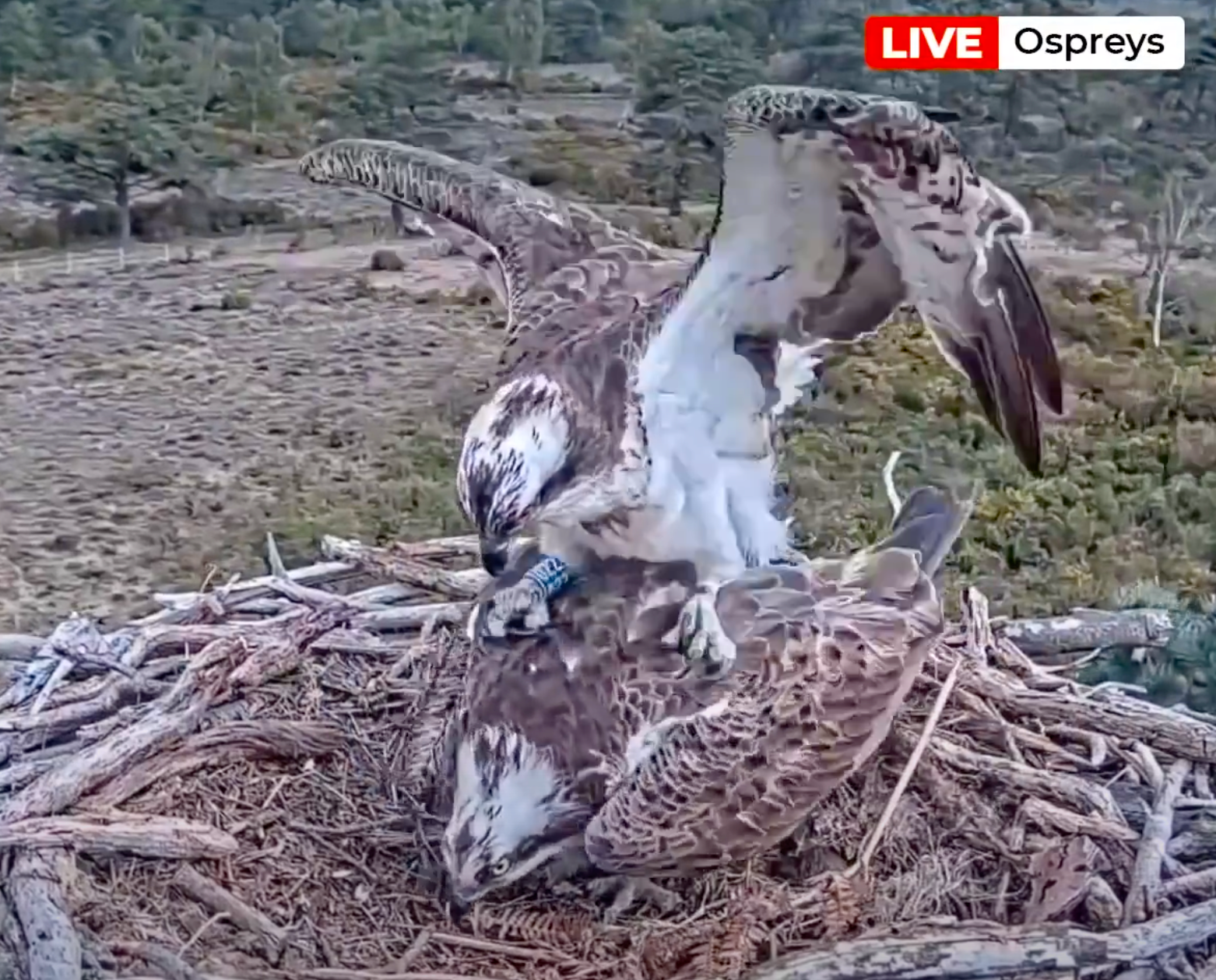 The project has another 2 years to run and, given that ospreys can live for between 10 and 25 years, although no birds have yet bred, it seems only a matter of time before they do. This will show the success and importance of these pioneering translocation projects, thus ensuring the future of these wonderful iconic birds. Although 022 arrived too late for the 2021 breeding season, after CJ7 had laid 5 unfertilised eggs, there are big hopes for the coming Spring. The ospreys arrive back late March/early April and if both birds survive the two way migration, then this summer could see the first breeding ospreys on the South coast in 180 years. How exciting is that! Good luck CJ7 and 022. Photo: 022 & CJ7 mating live on Chris Packham's online Self Isolating Bird Club in late May 2021!
To find out more about the  previous years of the project and to watch the webcam as osprey season approaches, visit the Birds of Poole Harbour website.
Dave Sage
Youtube video recording of the talk
Follow us on Social Media